Chat with us, powered by LiveChat Skip to content

‘Hospitals have never been so busy,’ stated Nick Triggle, BBC’s Health Correspondent, as the NHS reaches the end of another long year. With an ageing population and an onset of long-term lifestyle diseases such as diabetes, the NHS’s resources are already being significantly stretched. It is now common knowledge that NHS England have been failing to meet their target of seeing 95% of patients within a four hour window, and so the added pressures of winter and its related illness are causing fears as to how health organisations will cope over the next few months.

Experts are now saying that a lack of community services in which to release patients is adding to the pressures – according to the BBC, leading research group the Nuffield Trust have said that the NHS needs to ‘urgently invest in extra beds in care homes and other community settings to relieve the pressure on hospitals.’

Delayed discharges, otherwise known as ‘bed-days lost,’ have increased by more than 30% in the past five years to around 160,000 in October of this year. In some areas, one in five beds are occupied by patients that are medically fit enough to be discharged but have nowhere safe to be released to.

Rather than focus on the potential wreck of the NHS, however, particularly at what is supposed to be a festive and cheerful time, we should look at the potential to save it. The NHS does not have to be crippled in doom and gloom, as healthcare services in Scotland are currently proving to us.

NHS England are now looking to Scotland in an attempt to meet their key performance indicators (KPIs) and decrease the number of ‘bed-days lost.’ Despite experiencing a difficult winter last year, Scotland’s health services are currently in a much better position: their waiting times in particular are lower than they were last winter, especially compared to those of England, Wales and Northern Ireland whose statistics are all worse than they were this time last year.

Experts have suggested that one of the main contributing factors to Scotland’s comparable success is that they have been able to discharge their patients at a much quicker rate – delayed discharges in Scotland have fallen by as much as 8%. Many areas of the country have invested in intermediate beds to be provided within care homes and other community providers for hospitals to discharge patients into. Care for the patients can then be arranged as necessary and without utilising valuable bed space within hospitals. 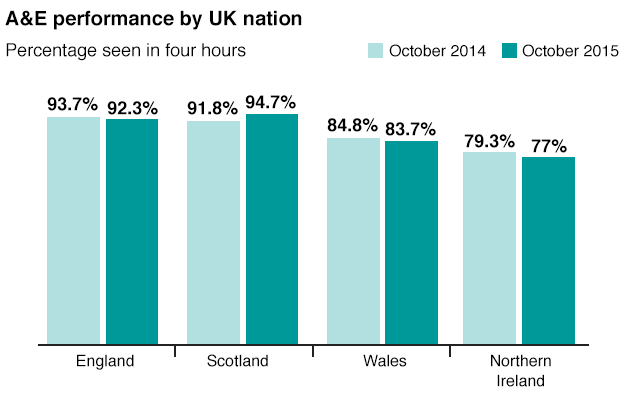 Earlier this year we published a blog that asked: ‘Can business intelligence reduce the winter pressures faced by the NHS?’ We now have to question how business intelligence and data analysis can help reduce the number of ‘bed-days lost’ and help organisations reach their KPIs such as the four-hour waiting time for patients in A&E.  Software such as our core technology CXAIR can help in any number of ways – for example, dynamic dashboards can be created with gauges and charts to display KPIs without the need for trained data analysts to provide the insight, and more informed decisions can be made with increased speed as a result.

CXAIR also unifies structured and unstructured data, allowing organisations to track their patients’ journeys from admission to discharge without having to manually sift through paper records. Cutting down on the time spent finding the data means speeding up the process of actually using it. Patients can not only be diagnosed and treated more quickly, but it will also be possible to prevent potential illnesses and admissions to hospitals by providing access to a patient’s history. As a result, the number of ‘bed-days lost’ will be reduced as potential admissions will have been prevented.

The progress being made in Scotland and the potential advantages offered by advances in data analysis technology are providing hope for NHS England. Christmas is famously a time of community and family – if we learn from our neighbours and invest in community-based care for those in the most vulnerable positions, the winter may not be so bleak after all.

For more information about CXAIR please contact our team at info@connexica.com

Get in touch to discuss your requirements further

This form collects your name and email so that we can contact you regarding your interest. Check out our privacy policy for the full story on how we protect and manage your data!

We use cookies to ensure that we give you the best experience on our website. If you continue to use this site we will assume that you are happy with it.Ok