Chat with us, powered by LiveChat Skip to content

With increasing pressure to meet targets, the NHS is monitored constantly to assess performance. One target that has been repeatedly missed in recent months states that 95% of patients should be treated and discharged from the Accident and Emergency (A&E) department within four hours. However, waiting times continue to increase with every report and January 2016 in particular recorded that only 83% of patients were discharged within four hours, missing the target by a wide margin.

With this in mind, I decided to download the March 2016 A&E admissions data, freely available from the NHS England website, and import it into CXAIR with a view to gaining data insight into the startlingly low figures that have been reported.

As CXAIR can seamlessly load from any data source regardless of file or database type, I was presented with a fully indexed view of the data within seconds of importing:

CXAIR operates by creating a copy of the data, leaving the source database unmodified, and indexes the entries for sub-second access through natural language search queries and mouse clicks. With search-powered analytics, navigating the data is simplicity itself; while other analytic solutions rely on comprehensive SQL knowledge or specific analytical training, CXAIR can be used by anyone familiar with an internet search engine, eradicating the overreliance on IT departments to analyse data within an organisation.

After viewing the data, it became apparent that the A&E Target of 95% is measured within three different departments before being calculated whether a hospital passed overall:

Using the navigation bar at the top of the page, I entered the ‘Venn’ page and populated three sets of data, one for each target. With the intuitive drag-and-drop interface built into CXAIR, creating and merging sets to gain data insight is a user-friendly task that can be utilised to quickly establish relationships between data sets.

Here, the three departments have been loaded with the number of results that meet or exceed the 95% target displayed in each set:

What is immediately apparent is the disparity between the sets, with Other A&E/Minor Injury seemingly meeting far more targets than the other departments. However, this is due to the fact that there is far more data available for Major A&E, increasing the chance of missing the 95% target. Also, smaller hospitals have been included in the results that simply do not have Single Specialty or Minor Injury units, resulting in less data and a lower chance of missing the 95% target. As the interest is in the relationships between the sets available, this is not an issue.

When combining data by simply dragging and dropping the sets, relationships can be established. In this example, the Venn diagram shows that there are only six examples where the 95% target was met in both Other A&E/Minor Injury and Major A&E: 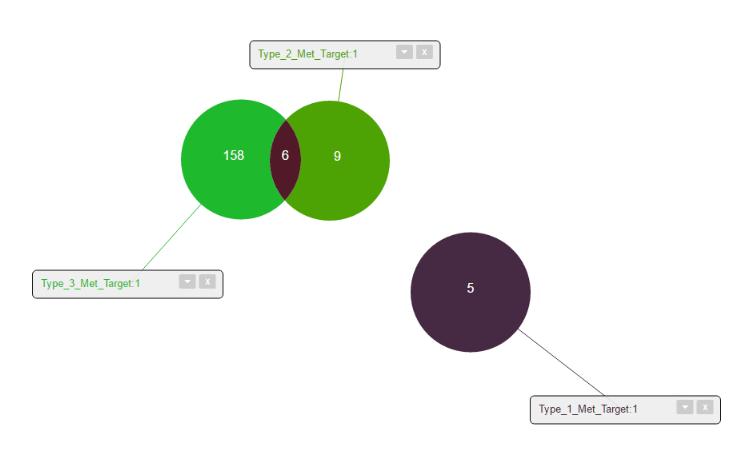 Furthermore, the following example shows that no hospital met all three targets or met the target for both Major A&E and Single Specialty simultaneously: 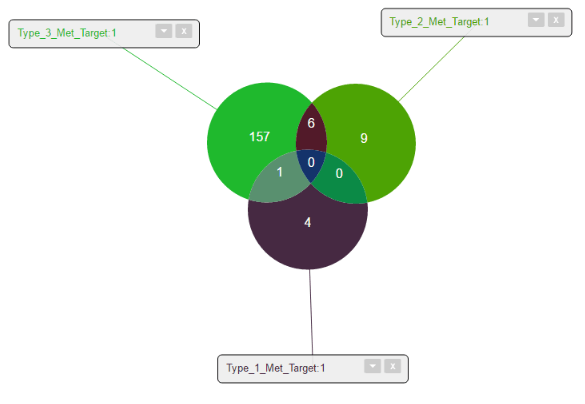 With these relationships established, I decided to incorporate another set into the diagram that counts the number of hospitals that met the target overall, rather than meeting the target in one department: 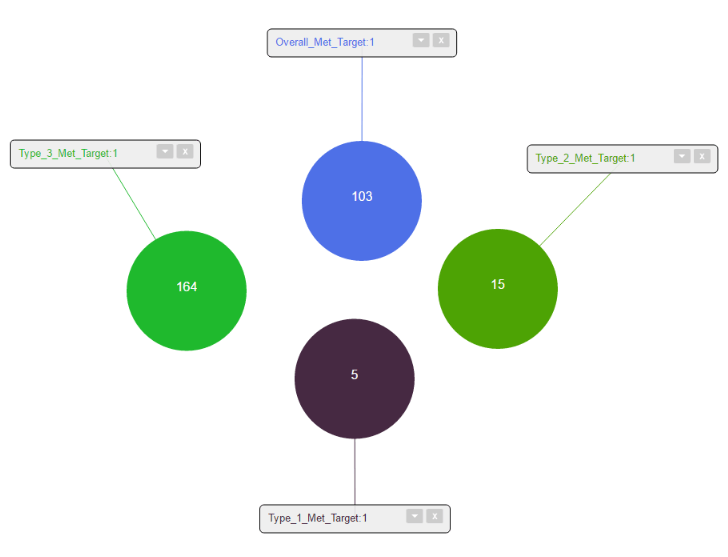 The set, shown at the top of the Venn diagram, shows that 103 hospitals passed overall when all three departments were taken into consideration. When combining the sets, the outcome is as follows: 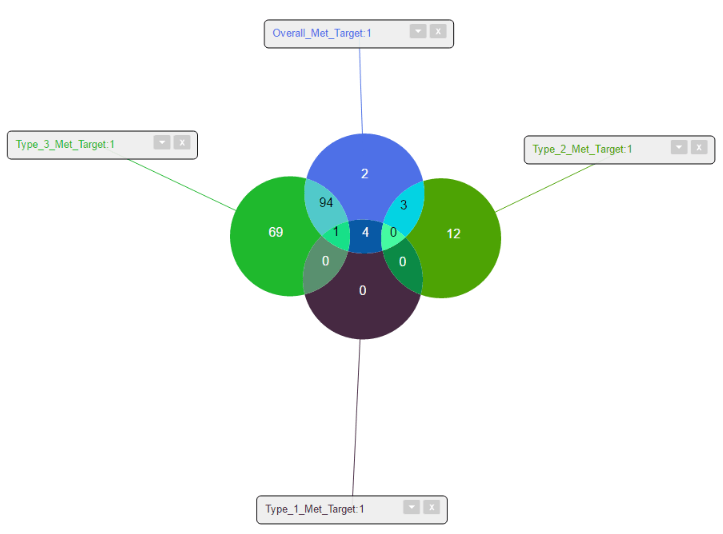 Clearly, meeting the target in Other A&E/Minor Injury has the biggest impact on whether a hospital meets the 95% pass criteria. Furthermore, every hospital that met the target for Major A&E passed overall.

The current target is looking more optimistic than realistic. Further analysis of the A&E system over time exposes multiple factors that are rooted within the system, with the huge wealth of data available opening the floodgates to potential analysis.

While far more data insight could be retrieved from the raw patient data rather than the pre-aggregated report supplied by the NHS, this quick exercise demonstrates just how easy it is to establish relationships between data using Venn Diagrams in CXAIR.

One example of effective Venn utilisation within an A&E department is to determine ‘frequent fliers’ – individuals who return to A&E on a regular basis. With each month represented by a separate set, subsequent overlapping would show patients who have attended in more than one month, allowing health professions to target individuals who may need more support.

I am not a data scientist, nor am I an experienced analytics expert. With CXAIR, this is simply not important. The software has been built from the ground-up with one principle: data analysis should be available to anyone. Within minutes, and with minimal fuss, clear data insight has been drawn from a database and displayed in clear, easily digestible chunks to draw conclusions from related data.

Get in touch to discuss your requirements further

This form collects your name and email so that we can contact you regarding your interest. Check out our privacy policy for the full story on how we protect and manage your data!

We use cookies to ensure that we give you the best experience on our website. If you continue to use this site we will assume that you are happy with it.Ok